During the Ming Dynasty of China, noblewomen wore very long artificial nails as a status symbol indicating that, unlike commoners, they did not have to do manual labor. In the early 19th century in Greece, many upper-class women wore empty pistachio shells over their nails, slowly spreading the artificial nail trend across Europe. In the late 20th century, artificial nails for women became widely popular all over the world.

Acrylic Nails are the most common and popular types of artificial nails available. They are also one of the longest lasting and most durable kinds. Acrylic nails are created with the combination of two products-the polymer and the monomer. This mixture is then applied with the help of an acrylic brush over the natural fingernails of a person. After the application, one has to let it dry. Once dried, this forms an elongated shape. This can be further shaped as per your requirements. You have to make sure that you maintain these properly to avoid any infections. 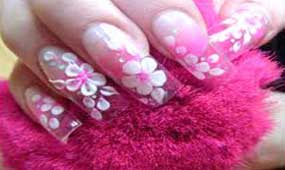 Gel nails are made with a "light cured" or “UV” gel consisting of pre-mixed polymers and monomers. This special gel is first brushed onto the surface of the natural nail, then is set, or "cured," under an ultraviolet light. "No-light" gels, an alternative to the light cured gel, are slowly gaining in popularity. These gel nails are cured by brushing or spraying a gel activator onto the nails or by dipping the fingernails into water. Gel nails can be used over the entire nail and can also be used to fix split or broken nails. Artificial fingernails made from gel tend to look more natural than acrylic nails, but are not as strong or durable. Additionally, if they are not applied by a qualified professional, they may be hard to remove, resulting in damage to your natural nails.

If fitted properly, artificial nails are usually not problematic. However long term use and poorly fitted nails can seriously damage the nail bed and hamper natural nail growth. The most common problem associated with artificial nails is a fungal infection that may develop between the false and natural nail.

When an artificials nail are applied to the natural nail surface, minor types of trauma to the artificial nails which can happen from something as harmless as scraping a nail against a firm surface can cause separation of the nail from its nail bed. This allows bacteria and fungus to potentially enter the separated area setting up an infection. In fact, some hospitals won't allow their employees to have fake fingernails sue to the risk of harboring infection which could be transmitted to patients. Several deaths of premature infants were blamed on an acrylic nail infection transmitted to the babies by a nurse in the late 1990's. Infection can also be a risk when you have nails applied by a disreputable nail salon that doesn't follow sanitary practices.

Artificial Nails help conceal or fix broken, damaged, short, or bad nails. It also helps prevent people from biting their nails, breakage of nails, and protect splits. They are used when people are not able to grow the length and strength of natural nails that they desire. This problem can be solved by using certain nail techniques such as nail tipping, sculptured nails, nail wrapping, or acrylic overlays.