Nail polish was invented by the Chinese in about 3000 B.C. It was made from a mixture of Arabic gum, egg whites, gelatin and beeswax. It is unknown who the first person was to invent nail polish, but it was used by the ancient Chinese and ancient Egyptians. Chinese royalty often used gold and silver nail polish.

During the Chou Dynasty, around 600 BC, the royal colors were metallic gold and silver. So, the polish color choice for royalty was the same. It seemed that whatever the Dynasty color was; that was the color worn on people’s nails of the Chinese upper class. If the lower class attempted to wear nail polish, they could be punished by death. The polish at the time was colored with natural pigments.

By the turn of the 19th century, nails were tinted with scented red oils, and polished or buffed with a chamois cloth, rather than simply painted. English and US 19th century cookbooks had directions for making nail paints. In the 19th and early 20th centuries, women pursued a polished, rather than painted, look by massaging tinted powders and creams into their nails, then buffing them shiny. Some women during this period painted their nails with clear, glossy varnish applied with a camel-hair brush. When automobile paint was created around 1920, it inspired the introduction of colored nail enamels.

Modern nail polish is sold in liquid form in small bottles and is applied with a tiny brush. Within a few minutes after application, the substance hardens and forms a shiny coating ally by applying nail polish "remover," a substance designed to break down and dissolve the polish.

Nitrocellulose compounds are the main ingredient in the composition of nail polishes that are mass produced for the consumer market. These nitrocellulose compounds are dissolved in either butyl acetate or ethyl acetate liquids. When nitrocellulose is dissolved in the solution then additives including, but not limited to, film forming compounds, resins, coloring agents and adhesive resins are put in. The polymers cement to the nail bed to keep the polish on the nail. The polish dries, and as it dries, polymers harden, which is why nail polish does not slide off the nail.

Manufacturers add synthetic resins and plasticizers (and occasionally similar, natural products) to their mixes to improve flexibility, resistance to soap and water, and other qualities; older recipes sometimes even used nylon for this purpose. Because of the number of desired qualities involved, however, there is no single resin or combination of resins that meets every specification. Among the resins and plasticizers in use today are castor oil, amyl and butyl stearate, and mixes of glycerol, fatty acids, and acetic acids.

Nail polish has been traditionally worn by women, but has recently become more popular with men. Traditional colors for nail polish were red, pink and brown, and it can now be found in virtually any color. 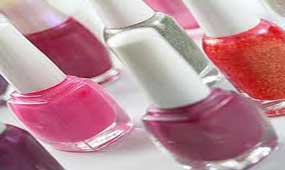 French manicures traditionally mimic the color of natural nails, using a clear, beige or soft pink polish on most of the nail with a white finish at the tips.OPI and Essie, two large nail polish distributors, create their nail polish with fun and catchy names and phrases.Black has been a popular color of nail polish with goths and punks of both genders since the 1970s, and has recently gained acceptance as a color for both men and women.Some types of polish are advertised to cause nail growth, make nails stronger, prevent nails from breaking, cracking and splitting and stop nail biting. Nail polish may be applied as one of several components in a manicure. However, some nail treatments contain ingredients such as ammonium hexafluorophosphate.

It is no surprise that there are health effects associated with nail polish as they have contained some of the worst toxins, especially where fumes are concerned since they were developed Toluene is used as a solvent in nail polish, meaning that it dissolves other chemicals to create a solution. It's a dangerous chemical that causes birth defects in animals, affects the central nervous system and is fatal if swallowed.

Ethyl acetate evaporates from the nail, which causes the polish to dry and harden. This means that you're breathing in the fumes from the chemical as your manicure sets. This solvent can pass through the skin, and prolonged exposure to the fumes can lead to lung, heart, kidney, and liver damage.

Phthalates are easily absorbed chemicals that keep nail polish chip-free. The European Union has banned them, but they're legal in the United States. They're linked to early puberty in girls, low sperm count in men, sexual deformities and problems with fetal development.