Nail Industry In The US

What you should Know about the Nail Industry in the US

Women nowadays like painting their nails and going to nail spas and salons to get their nails done.  Many women are very much attached to their feminine side and that they like colors on their nails to make them both happy and confident.  These are some factors that make the nail industry in the US popular and widespread.

Where did it First Start? Nail painting evolved from the ancient India, China, Egypt, and Babylon wherein women painted their nails to show elegance and high social status.  Now, any woman can already paint her nails just for fun, entertainment, and recreation.  It was when the nail polish industry was introduced in 1930’s that it became a popular trend among women until today.  Today, instead of social class, a nail polish signifies art and style or fashion.

Why Nail Spas are increasing in the US? As more people become stylish due to increase of media influences, more nail spas and salon are also popping up in the entire US.  Now, over 200, 000 nail spas are on business in the US alone, yet there are still many customers to cater daily.  Can you just imagine how much income the nail industryproduces in a year?  With the ongoing growth of women and even men who avail such nail treatments, nail salon businesses are also growing in numbers.  And with this fact, more profits will be given to the US economy that can benefit the whole citizens.

What does Nail Spas Offer? Nail Spas primarily offer manicures, pedicures, and some nail improvements.  They also offer choices for nail care and polishes, such as acrylics, silks, and fiberglass wraps which is very durable.  You will be given the chance to select which color of nail polishes you like and they will even give suggestions on what color can go with your dress color, especially for an important event.  Today, most nail salons offer additional services like the nail art that makes your fingernails and toenails look like a piece of art.  It’s very interesting, some are like cute paintings while some are really weird and out of this world.

How to be a Manicurist 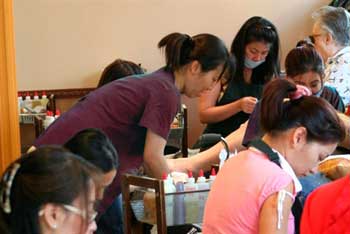 Those people working in a nail spa, tending nail care for you, are called nail technicians, nailist, or manicurist.  Manicurist is now considered to be one of the fastest-growing specialties in the US and globally.  If you have the hobby of painting your nails or painting other people’s nails, you can be a well-paid manicurist.  To be a licensed manicurist, you have to go through training in a cosmetology school.  You must be sixteen years old and above and have finished high school.  After you have finished the course, you can then find job experiences in nail spas around your town.  With much experience, you can land a good job at top nail spas and receive a better pay for your expertise.

There are deals and packages that the nail industry offers their customers.  Some give discounts and freebies for their usual customers to show appreciation for their loyalty.  Generally, because of the growing demand of nail treatment services, more nail businesses are expected to rise.