Pedicure infections are surprisingly very easy to pick up, if proper disinfection guidelines are not followed. Usually occurring in salons and spas that cater to numerous individuals, pedicure infections have been known to get as serious as amputations and even death. The major problem lies in not so much the cleanliness of the pedicure spas as many would assume, but in the necessary disinfectant guidelines.

One pedicure infection that can result is called atypical mycobacterium, which is often misdiagnosed and treated as a common staph infection of the skin. The first symptom is usually a pimple that becomes larger, like an infected cyst or furuncle. To treat the infection successfully, a culture must be taken to look specifically for the mycobacterium organism. This can require several weeks to complete, with the appropriate treatment being multiple rounds of antibiotics lasting up to several months. 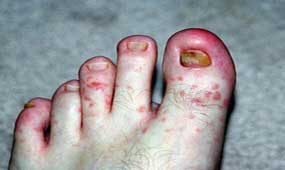 What is staph infection? How do people get staph infections through pedicures? Staph is the shortened name for staphylococcus, a type of bacteria. These bacteria can live harmlessly on many skin surfaces. When the skin is punctured or broken for any reason, staph bacteria can enter the wound and cause an infection. Staph infections normally cause a red, swollen, and painful area on the skin. Other symptoms include: a skin abscess, fever, and warmth around the infected area.

In other types of infections such as in the case of MRSA (methicillin-resistant staphylococcus aureus) infections, it will start with a small red bump and would grow by accumulating pus inside. It can be very painful and would extend deep in to the tissues as well. At the same time, it is possible for these persons to develop fever and rashes along with a MRSA pedicure infection. This bacterium is extremely difficult to treat in humans since it is very resilient to antibiotics including the penicillins and as the name suggests namely Methicillin and oxacillin. This bacterium has normally cause outbreaks in hospitals and health care settings since it’s so hard to treat and very easy to transmit from patient to patient (HA-MSRA or Health Care Associated MSRA). Recently though, it has been found causing outbreaks outside of hospitals and clinics and in communities amongst healthier people like in salons and spas (CA-MSRA or Community Associated MSRA). Pedicure Infection can also lead to a nail fungus. A nail fungus or a fungal infection of the nails is the most common type of infection that you can get in and around your nails.

The signs of a nail fungus are usually a yellow, discolored, thickened nail and for most people it is just a cosmetic issue. However, for a select few, for those people who do not have an intact immune system or people who do not have good sensation in their feet, it can cause some pain and can be a health problem if not treated.

According to United States Environmental Protected Agency, www.epa.gov, regular cleaning is just not enough to avoid pedicure infections as serious germs can with standard ordinary cleaners. To avoid harmful bacteria from building to high levels, disinfection is necessary. To kill harmful bacteria, viruses and fungus, the cleaning agent used must an EPA registered hospital or medical grade bactericide, viricide and fungicide.